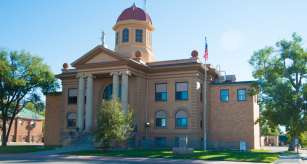 Belle Fourche (pronounced bell foosh) is French for “beautiful fork.”  It is so named because this is the meeting place of the Redwater River, Hay Creek and Belle Fourche River.  Initially, this was a popular meeting place for trappers and fur traders.  However, after the gold rush, people started using the area for ranching  providing food to the miners.  Once Seth Bullock convinced the railroad to build in the area, it became a major livestock trading hub.  In fact, Belle Fourche was the largest livestock shipping point in the world in 1895 – with 2,500 carloads per month.